Rick "Nifty" Middleton was born in Toronto, Canada on Dec 4, 1953. He started skating when he was 4 years old as his dad froze a small rink in their backyard and the older boys would take him on the ice so they could skate! Rick began playing organized hockey with Wexford when he was 6 years old in 1959-60 and soon afterwards started playing street hockey right out in front of his house because there was a street light when it got dark early.
​
Nifty always credited his years of playing street hockey to the development of his excellent stickhandling and passing skills!

Rick was lucky enough to play for only one coach (Glen Mortley) with Wexford until he was 13 years old when he received an invitation in the mail to tryout with a new organization in the Toronto Hockey League named the Toronto Young Nationals. Rick was persuaded by his Wexford teammate Billy Marshall to tryout as he also received an invitation. As it turned out he agreed and it was a decision that would put him on the road to the NHL.

Rick spent the next 4 years with the Young Nats (as they were called) under coach Frank Miller who he always credited with making him a better skater and hockey player.  He even invited Frank to join him on the ice during his Bruins #16 retirement celebration at the TD Garden in Nov/2018.

Nifty's game had improved so much in those 3 years that he received full scholarship offers to 6 U.S. schools including Boston University and was drafted by the Major Jr A Oshawa Generals in the Ontario Hockey Association.

In 1970 Rick decided that he wanted to play Jr A for the Oshawa Generals, but wasn't ready yet physically so he played one year (1970-71) of Jr B hockey in Toronto for the Young Nats.  Nifty had a great year, he was voted on the 1st All Star Team at right wing and won the Rookie of the Year.  He now felt he was ready to tryout for the Generals.

Rick went to training camp in Sept/71 and made the team under coach Gus Bodnar.  His first year with the Generals was good, but he knew his next year would be his NHL Draft year as he would be turning 20 years old.  He not only had a great year, he had what turned out to be the best season of his entire hockey career.

Nifty finished the season 3rd in the league in points with 137 and 1st in the league in goals with 67! He also won the coveted Red Tilson Award (league MVP)!  Nifty had made it...and now all that was left was the NHL Draft in Montreal in June 1973.

The rest as they say is history.  Here's a breakdown of Rick's professional career (1973-88), awards, and honors bestowed upon him during and after his NHL career! 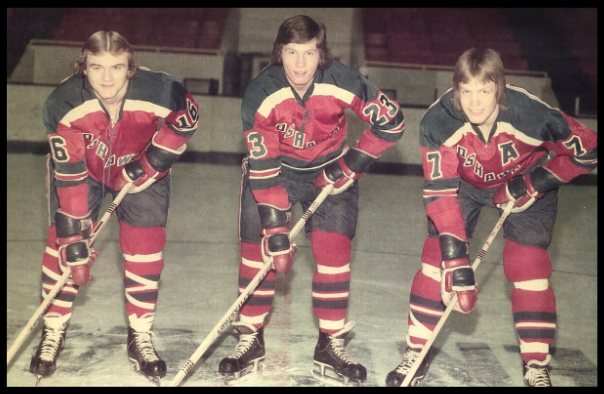 Toronto Young Nationals photo with coach Frank Miller center who was on the ice with Rick on his retirement night.
,
​
​DRAFTED IN JUNE 1973 BY THE NY RANGERS...1ST ROUND...14TH PICK.

1973-74...RICK PLAYED IN THE AMERICAN HOCKEY LEAGUE FOR THE RANGERS FARM TEAM...THE PROVIDENCE REDS IN PROVIDENCE RI.  HE WAS VOTED ON THE 1ST ALL STAR TEAM AT RIGHT WING AND WON ROOKIE OF THE YEAR IN THE AHL! THE REDS WENT TO THE CALDER CUP FINALS THAT YEAR LOSING TO THE HERSHEY BEARS IN 5 GAMES.

IN 1975-76 IT WAS EARLY IN HIS SECOND YEAR IN NY WHEN THE RANGERS MADE ONE OF THE BIGGEST TRADES IN NHL HISTORY.   THEY TRADED BRAD PARK AND JEAN RATELLE TO THE BOSTON BRUINS FOR PHIL ESPOSITO AND CAROL VADNAIS.  RICK HAD THE HONOR OF PLAYING ON THE SAME LINE AS ESPO THAT YEAR BUT THE TEAM DIDN'T GEL AND IT WAS THE ONLY YEAR IN HIS CAREER THAT HE MISSED THE PLAYOFFS.
​
IN MAY 1976 RICK RECEIVED A PHONE CALL FROM THE NY RANGERS COACH & GM AT THAT TIME, JOHN FERGUSON. HE TOLD RICK THAT THEY WERE TRADING HIM TO THE BOSTON BRUINS FOR KEN HODGE.
RICKS DAYS IN THE BIG APPLE WERE OVER...BUT THE BEST WAS YET TO COME! 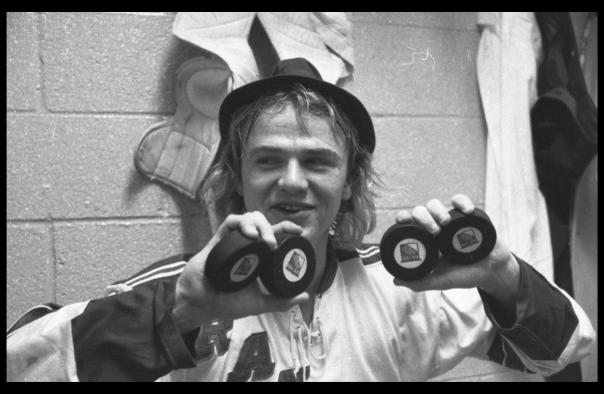 "My only 4 goal game of my career was during my rookie year with the Rangers 1974-75. We beat the California Golden Seals 10-0!"
​​RICK REPORTED TO THE BRUINS TRAINING CAMP IN SEPT 1976 AND MET HIS FUTURE COACH FOR THE NEXT 3 YEARS...THE ONE AND ONLY DON CHERRY! DON PUT RICK ON A LINE WITH JEAN RATELLE AND JOHN BUCYK FOR HIS VERY FIRST BRUINS GAME VS THE MINNESOTA NORTH STARS!

RICK SCORED A HAT TRICK IN HIS FIRST BRUINS GAME (ONLY BRUIN TO EVER DO IT) BUT AS RICK SAID... "HOW CAN YOU NOT SCORE A HAT TRICK WHILE PLAYING WITH THOSE GUYS?"

NIFTY PLAYED IN 3 ALL STAR GAMES IN 1981, 82 & 84, AND WAS VOTED AS A SECOND TEAM ALL STAR AT RIGHT WING IN 1982. HE ALSO WON THE NHL'S LADY BYNG TROPHY WHICH IS AWARDED ANNUALLY TO A PLAYER THAT IS JUDGED TO HAVE EXHIBITED THE BEST TYPE OF SPORTSMANSHIP COMBINED WITH A HIGH STANDARD OF PLAYING ABILITY.

NIFTY RECEIVED THE HUGE HONOR OF BEING NAMED CO-CAPTAIN OF THE BRUINS WITH RAY BOURQUE IN 1985 UNTIL HE RETIRED AFTER THE 1988 SEASON.

HE IS IN THE RECORD BOOKS FOR BEING ONE OF ELEVEN PLAYERS THAT SCORED 20 OR MORE GOALS IN A SINGLE SEASON IN THE 1977-78 SEASON! IT'S STILL AN NHL RECORD MORE THAN 40 YEARS LATER! 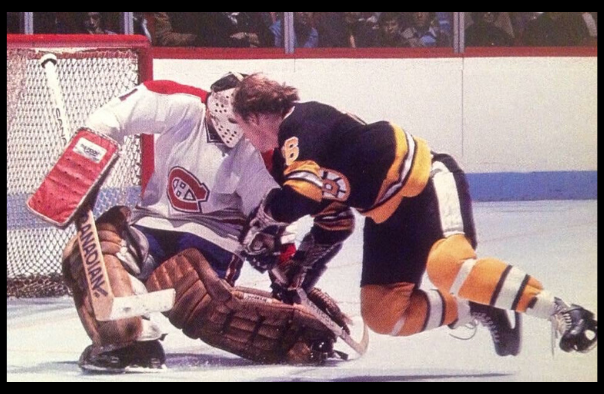 Nifty and the Bruins had numerous classic games against the Montreal Canadiens.
POST NHL CAREER

IN 2008 NIFTY WOULD BE NAMED THE PRESIDENT OF THE BOSTON BRUINS ALUMNI ASSOCIATION ... A POST HE STILL HOLDS!

NIFTY HAD THE HONOR OF BEING INDUCTED INTO THE OSHAWA GENERALS HALL OF FAME IN 2005, THE MASS HOCKEY HALL OF FAME IN 2012, THE NH LEGENDS OF HOCKEY AS A COACH IN 2014, AND IN 2017 HE RECEIVED THE NEW ENGLAND SPORTS MUSEUM'S HOCKEY LEGACY AWARD.

RICK ALWAYS SAID HE THOUGHT THE GREATEST HONOR A FORMER PROFESSIONAL ATHLETE CAN RECEIVE IS TO HAVE THEIR NUMBER RETIRED BY THE TEAM THEY PLAYED MOST OF THEIR CAREERS WITH! WELL THAT'S EXACTLY WHAT HAPPENED 30 YEARS AFTER HE RETIRED.

ON NOV 29, 2018 NIFTY RECEIVED THE ULTIMATE HONOR FROM CAM NEELY AND THE BRUINS OF HAVING HIS #16 RETIRED TO THE BOSTON GARDEN RAFTERS FOR ETERNITY! HE IS ONLY ONE OF ELEVEN PLAYERS TO EVER HAVE HIS NUMBER RETIRED IN THE ALMOST 100 YEAR HISTORY OF THE BOSTON BRUINS! 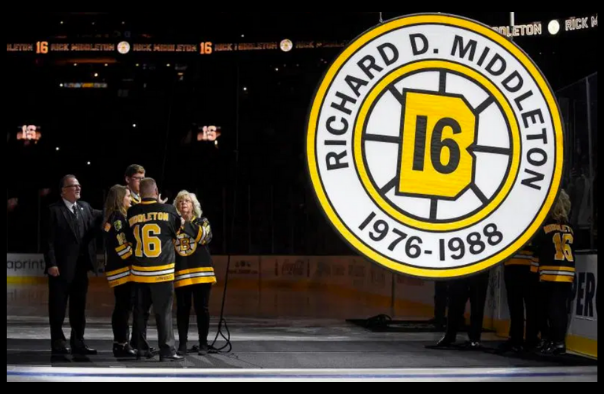